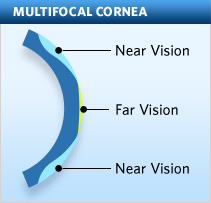 PresbyLASIK surgery is an exciting type of laser eye surgery that hasn’t yet been FDA-approved. It has however had many clinical trials performed on it, and it’s been used in countries around the world for the past several years; both have shown very positive outcomes of PresbyLASIK.

This procedure works by changing the way light enters the eye in many different areas along the surface of the eye. By doing this, it can change the way in which a person sees. For example, ask a person if they can see distances or things close-up and they likely won’t hesitate to tell you. PresbyLASIK changes that, allowing people to see in many different light zones. This eliminates the need for things like bifocals or reading glasses.

One of the things that is holding up FDA approval with this surgery is the fact that it hasn’t yet been proven to be reversible. In addition, there do seem to be a few risks that come with this surgery. One of those is blurriness, which may not go away even several months after surgery; reduced contrast sensitivity which will cause things such as halos around light. This reduced contrast sensitivity is said to likely go away, but still not until three or six months after the surgery is performed.