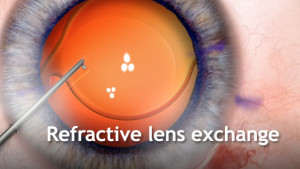 This procedure focuses on the lens of the eye, rather than the cornea and it’s mostly used for older people, although there are some instances where it is beneficial to younger people as well. This procedure removes the natural lens from the eye and replaces an artificial lens in the area where the natural lens once was. This type of surgery is good for people who have problems with their lenses, or who think that they will have problems in the future with their lenses.

Older people are the typical patient for this type of eye surgery because it’s often used to replace lenses that already have cataracts forming in them. While they may not be a problem currently, cataracts can develop significantly and can cause vision problems in the people who have them. Although this surgery is very common and widely performed, it’s still not yet approved by the FDA.