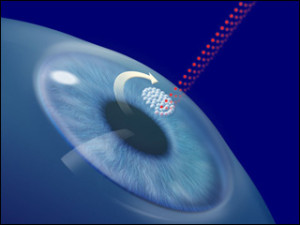 The term for this surgery pretty much sums up what separates it from the other types of LASIK surgery: it doesn’t use any blades. Instead lasers are used to make the necessary corrections to the cornea.

First with bladeless LASIK a femtosecond laser is used to direct laser energy to create the necessary flap in the cornea. This laser energy will then reshape the cornea in the manner needed. Then a second laser, the excimer laser, is directed towards the tissue in the eye that is now freshly exposed so that the cornea can be reshaped.

Because of the precision and the safety that bladeless LASIK carries with it, it makes laser eye surgery accessible to everyone. The downside to it however, is that it’s usually far more costly than other types of laser surgery.

Recovery from bladeless LASIK eye surgery is very similar to recovery from traditional LASIK surgery. Many patients report feeling eye irritation for up to two days, but this is normal with many different types of eye laser surgery. However, studies have also shown that bladeless LASIK surgery may also reduce chronic dry eyes, which is very common with any kind of laser eye surgery.